Please note, you must be an educator in higher ed or maybe high school to qualify to recieve the MCI


The coccus form of the bacteria included here does not necessarily indicate any taxonomic relationship. However, all of these organisms are parasites of humans, and some are pathogenic. The isolation from human sources of these and related organisms and their differentiation also involve some common procedures and problems.

The Family Micrococcaceae consists of gram-positive, spherical bacteria which typically divide in two or more planes to form clusters of cells. Two of the genera, Staphylococcus and Micrococcus, are normal inhabitants of the human skin and are differentiated by their oxygen relationship Staphylococcal infections are usually caused by S. aureus which can be isolated from the mucous membranes of the nasopharynx in about one-third of the human population. Diseases produced by S. aureus include boils, impetigo, pneumonia, osteomyelitis, mastitis, meningitis, endocarditis, bacteremia, enterocolitis and urogenital infections. Many strains produce an extracellular enterotoxin capable of producing food poisoning and toxic-shock syndrome. 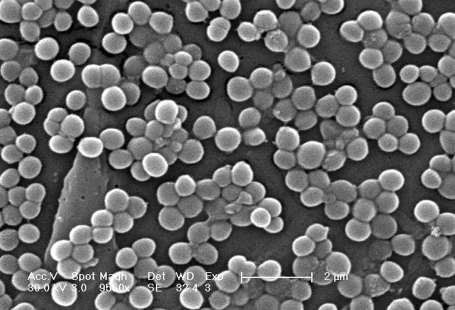 Figure 13.1. Staphylococcus aureus. An electronmicrograph of the microbe. Photo courtesy of Janice Carr at the CDC

Clinical specimens suspected of containing staphylococci should be streaked onto appropriate selective-differential media such as Baird-Parker Agar or Vogel-Johnson Agar. Typical colonies are gram-stained and observed for gram-positive cells in staphylococcal arrangements. The catalase test is useful in distinguishing staphylococci from streptococci which are morphologically similar and often isolated from lesions. Many strains of S. aureus form yellowish to golden-colored colonies, hence the species name. The major criterion employed to distinguish S. aureus from other staphylococci found on humans is the coagulase test. Production of coagulase, an extracellular enzyme which clots plasma, is a characteristic of nearly all strains.

Streptococcus is a member of the lactic acid group of bacteria and forms the dominant bacterial flora of the mouth and pharyngeal areas of humans and some animals. Streptococcus cells are gram-positive, catalase-negative and spherical or ovoid in shape. Because the cells divide in one plane, they are usually seen in pairs or short to long chains. Pathogenic streptococci are responsible for numerous diseases; some examples follow:

Diagnosis of suspected streptococcal infection is usually made from material of the anterior nasal or nasopharyngeal areas of the throat, or from pus, sputum, spinal fluid, discharges, exudates, urine, blood or milk. As streptococci tend to be fastidious organisms, a rich medium such as Blood Agar is inoculated with the specimen in order to obtain isolated colonies. If the specimen is taken from a site containing a wide variety of indigenous or contaminating organisms (e.g., the rectal area or wounds), media with one or more selective agents are streaked. After incubation, the plates are examined for typical streptococcal colonies which tend to be white, glistening and relatively small.

Most strains of Streptococcus which are responsible for diseases are hemolytic on Blood Agar. Hemolytic reactions are classified as α, β or γ according to the appearance of zones around isolated colonies growing on or in the medium:

β-hemolytic strains of S. pyogenes are the principal causes of strep throat and scarlet fever. Rheumatic fever and glomerulonephritis develop as secondary complications. α- and γ-hemolytic streptococci are occasionally associated with chronic diseases or are non-pathogenic. S. pneumoniae (the pneumococci) is α-hemolytic and causes the majority of bacterial pneumonia cases in humans. Pneumococci can be isolated from the pharynx of at least 30% of non-diseased humans. An important characteristic which distinguishes pneumococci from other α-hemolytic streptococci is its sensitivity to the antibiotic optochin.

Recently, certain genetically and biochemically-distinct groups of species have been removed to new genera by Streptococcus taxonomists: Enterococcus includes the enteric or fecal streptococci (e.g., E. faecalis and E. durans), and Lactococcus includes the dairy-related lactic streptococci (e.g., L. lactis). The test for hemolysis and the associated terms continue to apply to these new genera.

The Family Neisseriaceae consists of gram-negative organisms, usually appearing as cocci. Cells of the genus Neisseria tend to be arranged in pairs with each cell flattened where it is in contact with its mate, hence a coffee-bean shape is generally seen and is highly diagnostic in clinical samples. The principal habitats of neisseriae associated with humans are the mucous membranes. Two species are pathogenic: N. meningitidis and N. gonorrhoeae, each named after its disease. 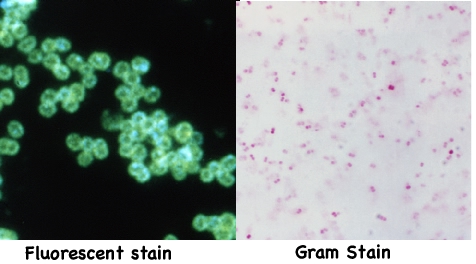 Specimens for bacteriological examination include pus, urethral exudate, urine and cerebrospinal fluid. Pathogenic neisseriae are difficult to culture in the laboratory as they have complex nutritional requirements and are very fragile away from their host. A clinical specimen must be cultured within a few hours of its taking. Incubation must be at 35-37°C in a very humid atmosphere with 5-10% carbon dioxide.

All species of Neisseria produce the enzyme oxidase; the oxidase test is very important in the identification of this organism and easily sets Neisseria apart from the preceding two genera discussed (as does the negative gram reaction). Neisseria is also catalase-positive, distinguishing it from Streptococcus.